Am I famous yet? 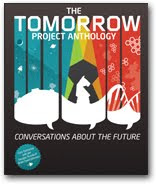 Context is everything. Check out the implications of this quote from the bbc's tech news:

"Intel's Tomorrow Project draws on the work of writers such as Corey Doctorow, Sonia Orin Lyris and Charles Walbridge to create visions for the future that can inspire the public, and act as goals for engineers."

(Okay, for those of you who have replied to me with "huh?" about this, I'll explain. Doctorow is a big name in SF&F and future tech and the co-editor of Boing Boing. He's famous, he's a fine writer, and to be listed after him in this BBC article says a lot about my name recognition value and makes me feel all yummy.  Now, it might be a mistake -- maybe they just like my name (I do) -- but let's assume the best.)


As for the anthology itself, the pdf is still available  here, and still free.
Posted by Sonia Lyris at 6:51 PM

Email ThisBlogThis!Share to TwitterShare to FacebookShare to Pinterest
Labels: me, publish, story, writing