I've just sent back the manuscript for The Seer, after reviewing all 695 pages of edits and questions. 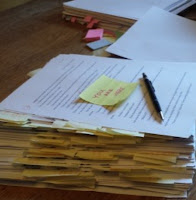 I've had my works edited for publication before, but that experience was nothing like this - not this large a work, nor reviewed in this level of detail. It arrived bristling with post-its, issues I needed to resolve with minimal changes. I had never seen anything like it, and it turned out I had no idea what I was in for.

Sure, going over every word and note was hard. At times wrenching. I laughed. I ranted. (No, not at my editors. If there was any target, it was me). Sometimes the process was really unpleasant. Sometimes it was exhilarating.

And yes, I'm very glad to be done. But here's the thing I didn't expected to be telling you now:

It was an amazing experience. I'm a better writer now than I was three weeks ago.

Why? Line by line, I got to see my work through my editors' eyes. I saw my mistakes highlighted. Some issues that I thought were settled I had to readdress, like why some people's titles are capitalized where others aren't. I spent a lot of time with the Chicago Manual of Style, re-reading other fantasy authors, discussing the nuances of language with others similarly obsessed. I found answers. I learned.

It was a crash course in what's good and what's weak in my writing, applied by the deft (and merciless) hands of two professional editors, both of whom want the same thing I do, for the novel to be the best it can possibly be. No one was concerned about my feelings at this point, nor should they have been; this was where all our non-trivial efforts came together to produce one final thing:

Prior to this, I would have thought this part of the process would at best teach me about narrative and flow. Commas maybe. Continuity, perhaps. But no - it was far more than that. This process gave me a view onto my novel that I had never had before. It underscored for me the point of all those words: to build a captivating world, characters who come alive, action that's vivid and meaningful.

Of course the work remains imperfect. I managed to accept that no matter how many times I went through it, mistakes were going to slip by. There is no absolute control over a work of this size.

Nor, perhaps, does there need to be. Because the important thing, again, is the story.

When I shipped the book back to the publisher, I felt the sorrow and elation of something ending and another thing beginning. It's out of my hands, now. I've done everything I know how to do to make the story ring like a bell.

Not quite mine any more, this world. Soon it will belong to my readers.

That's going to be a fine day.

Chapter one is here.