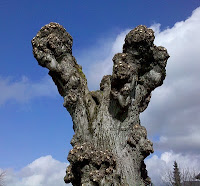 Do everything else first. Just kidding.

I have an answer to the age-old question of making relationships last. It's really quite simple. Two guidelines:

1. Hear what you want to hear.

2. Anything else is small stuff. Ignore it.

You have to get past the idea of right and wrong. Communication in relationships is not about right and wrong and it sure isn't about peace, love and understanding. As Mr. Shaw says, "The problem with communication is the illusion that it has occurred."

We don't communicate. We think we have, and that's all very well and good, but mostly we haven't. Since we're hallucinating about communicating anyway, let's hallucinate in a way that makes things work better. Makes sense, right?

Hear what you want to hear. This is easier than it sounds, since most people use lots of words when they talk and. You're smart -- just pick out the words that work best for you. Once you practice this a bit, it becomes surprisingly easy.

Ignore the small stuff. People get into fights because they think something matters a lot, but the fight is almost never about the subject in front of you. No, it's about some deeper principle or universal injustice. Sure, fight for fun if you want to, but don't fight the wrong battle. And when it comes to relationships, it's almost always the wrong battle. The actual thing in front of you? Small. Inconsequential. Ignore it.

There you have it. Go on, try these two guidelines. If in 20 years you're not still together with whoever, well. I'll give you your money back. Heck, I might even admit I was wrong.
Posted by Sonia Lyris at 5:02 PM