I remember when "awesome" began standing in for "that's nice" in casual conversation. My friends and I would use it to mock the verbal trends, along with "tubular!" and "gag me with a spoon!"

That was some many years ago. Listen, kids, the awesome thing?  It's gotten old. Move on. Seriously.

So I'm on a boat (no, really) and I'm talking to this guy named Travis. Travis is in his 30s and of an age to have been exposed to "awesome" as a simple conversational device growing up.  He's sharp, well spoken, and generally has an adult demeanor.  (Mostly. We're on a boat, after all).

So we're chatting about this and that and the a-word pops out of his mouth.  I pause, because (in case you forgot) we're on a boat, and when nothing urgent is happening on a boat, you're busy chatting, pausing, and sucking down beer. I'm in the pausing phase.

I say, "Listen, Travis, what happens if something truly awesome happens to you?  What if--" I look around at clear blue sky and squint against brilliant sun, "what if God Itself comes down from the Heavens and says--" Here I drop my voice, to make it sound ponderous and, you know, god-like. "Traaaaviiiissss!"

I have his attention now.

"What," I ask, infusing my voice with as much gravitas as I can summon, "are you going to say?"

I've asked this question before of people Travis' age and younger while trying to keep the peevedness out of my tone, because, I admit, it does peeve me; watering down superlatives is bad for words everywhere. They generally answer, "well, I guess I'd say 'really awesome!' or 'wow!'".

"Double-plus awesome", maybe?  Or they look at me uncomprehendingly.  Yeah, I get that look a lot. I'm getting used to it.

But Travis is a cut above and clever as well, and we're on a boat, where thoughts sometimes come clear in surprising ways.  I'm hoping he'll say something I haven't heard before. 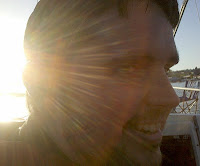 "Nothing," He replies. "There are no more words."

I am delighted. I grin back. He's got that right. Use up all your superlatives, and you're left with nothing. Silence.

Which, now that I think about it, isn't such a bad thing. I'm on a boat, the day is clear and warm, the beer is flowing, the company is good.

Silence. Companionable silence, thoughtful silence, intriguing silence.  Given the words that often come out of people's mouths, I find I'm coming to like silence a lot.  It's great.  It's fine.