Today a man I admire, respect and care for lies in the hospital dying.

I never heard him complain over the years. Not once. I was always impressed with that. Not when they took out his spinal fluid to irradiate it and put it back, not during chemo, surgery, and not when his heart stopped working, not when his brain stumbled. Each time he'd just - come back, step by step, as if it were something anyone could do. He'd shrug as he described his trials, as if the surgery or chemo were a small thing.  An inconvenience. A minor detour.

This time, it seems not.

Across the years, when I'd see him, he would hug me with a sort of fierceness and a smile, as if to say, "Yes, yes, I am a scientist, but also I believe in you."

The tears of grief are for we who remain in life, not for them, the dead. Where do the dead go, that I can wish this man well?  That I can send something, some final appreciation, some bit of love?

Goodnight to you, dear sir. I hope there is something on the other side, something good and wonderful, because imaging you gone forever is almost more than I can bear.
Posted by Sonia Lyris at 2:07 PM No comments:

You know it's art because it moves you, right?

And when the dark, delicious brew was happily ensconced in tummy, we could still see the image.  Twisted and distorted, but recognizable.

I recently submitted a story to the Journal of Universal Rejection (motto: "reprobatio certa hora incerta" (for which my translator gives "false contest hour uncertain", but that can't be right).

I was expecting a rejection, you know. I mean, their guidelines say they will reject anything you send, and point out the advantages of knowing in advance what the outcome will be: reduced stress, no need to spend hours on your cover letter (which, you know, I do), and not least of all the satisfaction of knowing that you were rejected from one the most exclusive journals in the -- any -- industry.

Wow!  With all those advantages, I just had to submit. So I sent in a short I have called "Done" -- something of an experiment because it is comprised entirely of dialog (yes, I am that good) -- and waited (breathlessly) for my rejection letter, which I assumed would be arriving nearly immediately.

For the first time in my life, a rejection to my story was not only assured but eagerly awaited.  This time -- for sure -- I'd get exactly what I'd hoped for.

Thank you for your interest in the Journal of Universal Rejection.
Due to the high volume of correspondence we have received of late, it
may be some time until yours is properly answered.  If you have
included a submission, rest assured that it has been filed and is
under review.  We will get back to you as soon as possible.

The Moment Between Okay and Not Really

You know the moment - it's the one between between slicing your hand and the gush of blood, slamming the door and realizing you've left a finger behind, the mis-step and the fall.  It's the moment when things are still okay, but not for long.

We were prepping for a short bike ride. I'd hit the garage door button, dashing out from under the closing door, stepping carefully over the beam of light that stops the process when he said "oh, I left my helmet inside."

Which descended anyway. Without bounce.  Without give. A powered heavy metal door coming down on my shoe, my toes, which was now clearly a really bad idea. I tried to pull my foot out. No way. I realized that not only was I stuck, but my toes were feeling quite a bit of pressure.

It's a special moment. It's when you realize that things might not be okay, and very soon.

I jammed my fingers under the door, pulled up with all my strength. Nothing moved. Then the pain began.

My friend had the presence of mind to run into the house and around to the garage and pull the quick release on the garage door -- a red handle, which makes so much sense now. The door released, came up.

I took another moment to survey the damage. It was my lucky day: the toes were insulted but not broken, annoyed but not crushed. Now, hours later, they are mumbling about my lack of good sense, but are ready to consider forgiving me.

Even so, the moment is limned in my memory, framed with all the intensity that an active, alert, and not-quite-panicking mind can create.

Such moments can change us, if we let them. They remind us that we are one slip, one poor decision, one moment's bad luck away from being mangled or killed.  Or, in my case, bruised, embarrassed, and feeling lucky.

And in more practical terms: garage doors are unforgiving masses of driving metal completely unlike sensitive elevator doors. Soft toes will not stop them.
Posted by Sonia Lyris at 4:36 PM No comments: 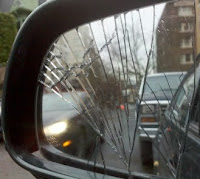 Another hit and run. Yep, someone came too close to my car again and scraped off the side mirror. No note, just a broken, shattered mirror.

Did I mention that my car was parked?

This is my third hit-and-run in the last two years, all of which happened while the car was legally and to all appearances safely parked.

Not to belabor the point, friends, but my car wasn't even moving.

Until I can get it fixed, what's behind me shows in a cracked mirror.  I don't worry too much about what's behind me, though. The car only seems to get hit when it's not moving.  This has only happened to me in this city.   Hmm.
Posted by Sonia Lyris at 7:17 PM No comments:

The problem with trying not to take things for granted is it implies taking them for not-granted, and what is that?  Imagining not having them? Imagining them being hard to come by?  A bathtub of guilt for having them, maybe. So get in and bathe. Make you clean, it will, if you use enough of it.

No. The point isn't to feel guilty about what you have, or what's easy to come by.

I chopped up this grapefruit, and it was Oh So Good. All full of grapefruity yumminess. The essence of grapefruit, for the taking. My taking. Mine to slice, mine to greedily consume, messy and juicy and mine.

To take something for granted is to take it for nothing. To take it for itself, whatever it is, now in this moment -- that's not nothing. That's something.  That's the fullness of grapefruit, and it has something to do with living.

Granted.
Posted by Sonia Lyris at 6:10 PM No comments: