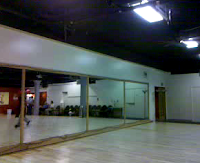 I'm coming off a weekend of a lot of tango dancing with friends and strangers and some things have occurred to me.  It's funny how the stuff you hear over the years comes back to you in waves of meaning and applicability.  For example, what if I only took steps that were right for me at the moment, rather than pushing myself to take a step because I thought it was expected?  What if I took my time with each step, even at the risk of being late?  Would this change my dance?

Most certainly it would.  I've been doing that, more and more, and it's -- delicious.

And of course tango is a mirror for life.

Someone recently said to me between dances, his eyes wide and his tone full of surprise, "there's something about the way you dance... it feels like-- like you bring something to the conversation."

Well, yes. In tango, the woman's role -- we say "the follow" in this country, but that's sort of a confusing term -- is about listening.  As is the man's role.  But the woman's role is also about responding, about saying something in return.  About making it a conversation. Too many men -- "leads" -- don't get that part.   And by "don't get" I don't just mean don't understand.  I mean never receive.  What a shame.

I realized something recently about why I dance tango, and I've been saying it a lot lately: