Change is Possible. With Cats

I have this cat. A bit under two years ago, I changed her vitamin mix, and she went from anxious and reactive to calm and damn-near approaching mellow.

Back before the new supplementation, this would happen: I'd be be walking by her and she'd tense up, lurch to one side. I'd veer, not wanting to trip over her, and then she'd dash in another direction, usually exactly into my leg, careening off of it, forcing me to then trip-hop over her. Then she'd make a mad rush to the other side of the house, where she'd hide, because, from her point of view, she'd just been attacked.

All because... well. Because she was, at baseline, hyper-vigilant and super anxious.

She is now a changed cat. In that same scenario, she simply stands there, unconcerned, and lets me walk by. Or step over her. Less wasted energy and -- needless to say -- a far more pleasant experience for us both.

I rather doubt that before her biochemistry changed, she saw herself as tense, nor do I think that afterwards she thought of herself as relaxed. She doesn't think that way. Not much for self-reflection.

No, from her point of view, the outside world just got better. Things were more settled, humans were kinder. More predictable. Some of this is credit to her walnut-sized brain's ability to re-pattern -- to learn -- to see things differently, when things felt different.

This is what's called a "virtuous circle" -- the better things get for her, the more she is able to see those things that are better for her, and the less she is looking for -- and finding -- things that are worse. Like clumsy humans trying to kill her with her their huge columns of legs, necessitating a mad dash for survival.

I'm not trying to make a particular point here. I'm observing patterns I've seen recently, up-close and personal. In my cat. And yes, in humans as well.

That our internal and external states influence and reinforce each other is hardly news, but how powerful that effect can be is sometimes shocking. My cat's baseline has changed radically, and her behavioral alterations are both obvious and significant, improving the world for her human companions as well. Her new ability to see the good in her world changed her world -- for the good.

Does she see that the change in her world originated inside herself? I rather doubt it. Could this have happened without that baseline change to her biochemistry? Alas, no. 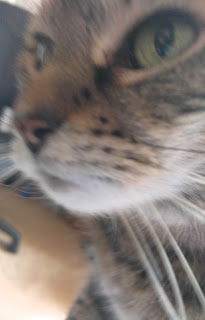 Extrapolating to humans, we cannot simply will ourselves to see things differently -- it's not enough. We must touch and change the many systems that touch us. I tried to tell my cat that all her problems were attitude many times before the biochemical change, and it made not one whit of difference.

My cat didn't listen to my advice about her attitude. My fine lectures were twitched away by her feline ears.