This Too Shall Pass

I have grown attached to this place. I ache at this leaving. I love waking to see the trees out the great expanse of my windows.  I even like being woken up in the middle of the night by the full moon in my face.

Yes, there's the road noise, which I thought would bother me more, but I learned to tune that out while still being in love with the green outside.

But it's not mine. I leave because it's not mine. Even if I owned the house, it wouldn't really truly be mine, it would just be - less someone else's. Maybe I wouldn't have to move if it were mine, but I would also have to take on all the responsibilities of ownership, costly responsibilities that I know too well, that I can't now afford. If I owned it. Which I don't.

It's so easy for me to think of the place I live as somehow defining me.  But we own so little, really.  Not even our bodies, which maybe we have on indeterminate lease, but surely don't own.  And if we don't own those, we sure don't own our houses, no matter what the laws like to say.

And so I pack the last of the boxes in full view of the cats who watch  curiously, ignorant of how this will soon ruin their world, their ownership. I can remember them howling in the car during the last move and for hours during the move before that, furious feline outrage at this intolerable upset.

I understand. I want to howl, too. 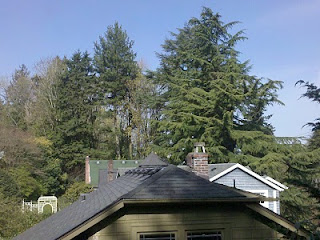 Email ThisBlogThis!Share to TwitterShare to FacebookShare to Pinterest
Labels: loss