It's hard to tell how many auto collisions are caused by drivers who talk -- or, powers forfend, text -- on a cell.

Why? Says WA state patrol: "In a speed or DUI related crash, investigators have physical evidence they can rely on. But a crash caused by cell phone use or texting requires self-reporting by the causing driver. Only in the most serious collisions can troopers get a search warrant to examine someone’s cell phone." 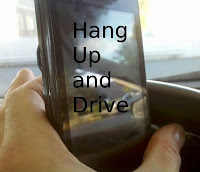 So what do those serious crashes say? The national safety commission says that hospital records indicates that drivers who talk on cell phones -- hand-held or hands-free, folks -- it doesn't matter -- are four times more likely to crash.

And, says the NSC, thousands of deaths annually can be directly linked to cell phone use. That's thousands of people who might be alive otherwise. What if one of them was your mom? Or kid?

I drive a car. I ride a motorbike. A bicycle. I also walk and jog in this fair city. I think I have some perspective.

And I use my cell phone a lot. But not while I'm driving. Lives depend on me knowing exactly where I'm pointing my many tons of deadly steel.

Lives. Depend. On me.

Studies clearly say that driving while using a cell phone is just as unsafe as driving drunk, hands-free or not. You knew that, right?

I'm standing at a city corner, waiting to cross, cars streaming by me ignoring pedestrian right-of-way laws, and as I watch something like one out of every four drivers is on their cell phone.

This is still a $125 ticketable offense.

I'm not sure it ultimately matters what society does to you for killing someone accidentally while driving, because at that point your life is a massive mess -- because . You've taken a life, without cause, without intent. It changes you. You can never, ever undo it.

So tell me: what is so essential that it needs talking about while in a moving vehicle on city streets? What phone conversation is so critical that it can't wait? Why not pull over?

What could possibly matter more than not accidentally hitting a fellow human?

If you drive, hear my plea: hang up, pay attention. Lives depend on you.

Email ThisBlogThis!Share to TwitterShare to FacebookShare to Pinterest
Labels: driving